DRIFT IN THE CITY 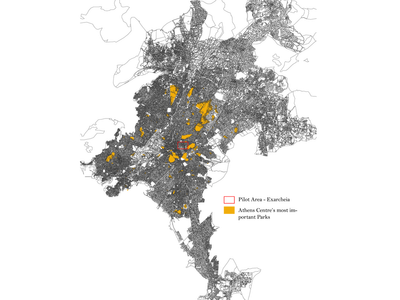 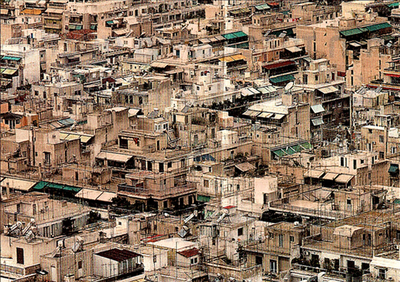 The Consequences of Overcrowding and the Non-planning 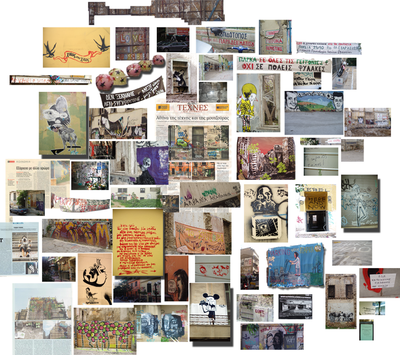 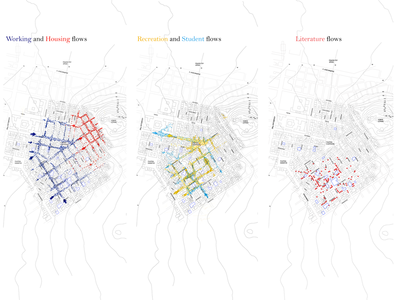 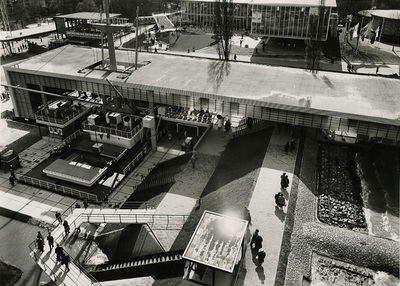 Spatial Influence - The Dutch Pavilion at Expo '58 in Brussels 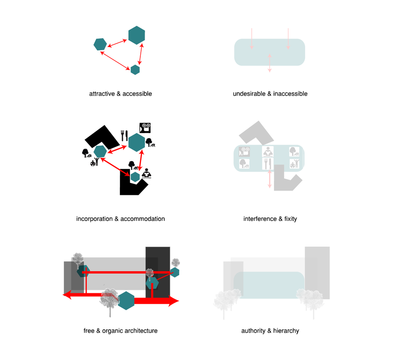 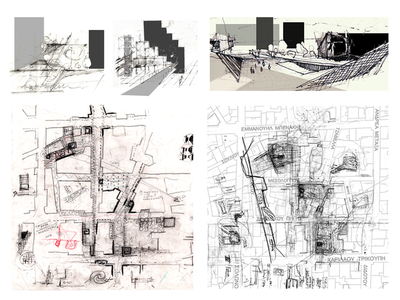 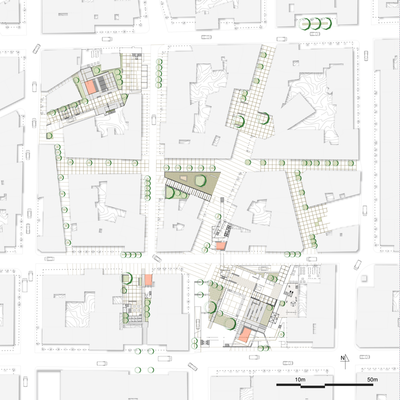 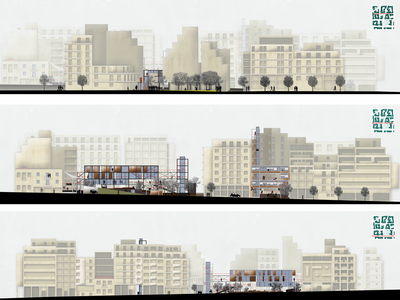 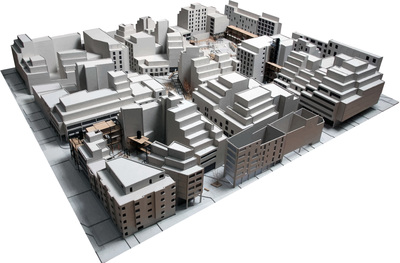 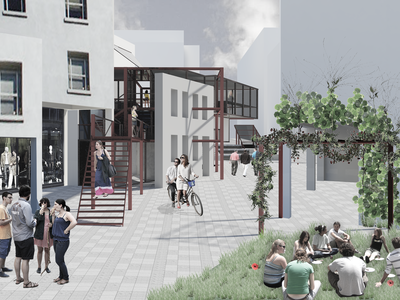 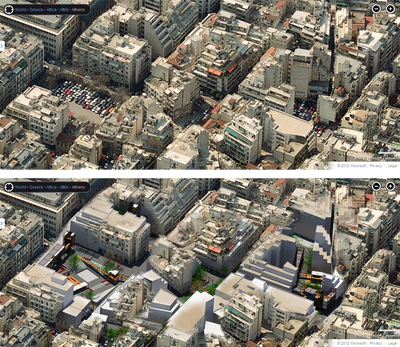 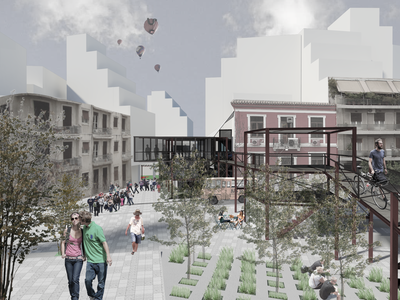 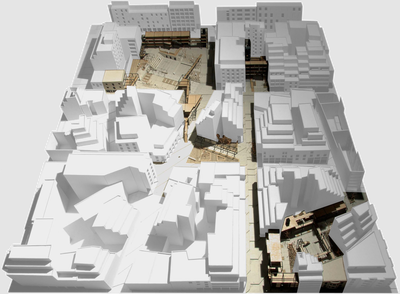 The Network of the Public Spaces 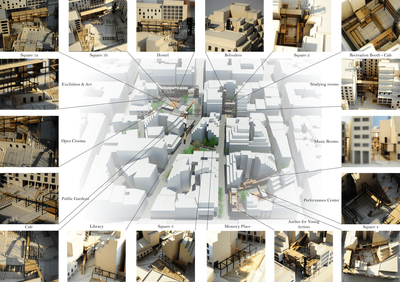 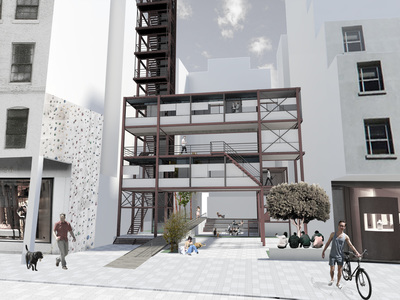 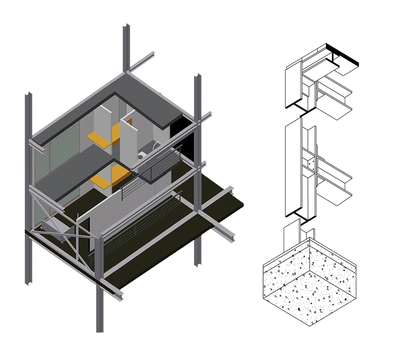 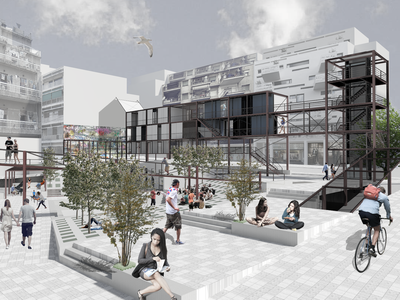 Street view - The main square & Hostel
The neighborhood of Exarcheia -  constitutes a pilot area for the formulation of my position towards social phenomena  - problems, such as lack of greenery and open space in the city, alienation and abandonment of the general center of Athens, traffic congestion, the problem of parking, the fragmentation of the central operations, the loss of city spots and the abandonment of “remaining” space into parking island.

Thus, arises the need to create an Urban Core, a concept in which the city could gain an organic entity and also, to add to the design of the city features such as the daily supply, the alternation of the uses and the common social life. To create a Network linking the open spaces of the city so as these spaces may become an instant destination of the citizens, in order that free - open - space of the city, to be not only the - what we call - public space (squares, parks, pavement). To design public space with alternative sense and philosophy (not another square), with various activities, recreation and rest (social events) in the new center environment of the city center. The lost landscape of the city center may then resurface, setting the issue and the debate on an Artificial Nature. To find more parking areas. To improve environmental conditions in the city center through the varied and continuous use of green.

It is required that this intervention does not alter the local character of the neighborhood that I study and to play the role of an intermediate space of sequential levels and uses connecting the pathways and the functions in an interactive relation with its immediate urban environment. In conclusion, the city through these spaces to be creative and democratic. The empty plots identified in the region and the “dead” buildings (buildings without any use such as preservable buildings, abandoned shells, buildings to be demolished) become the basis of the design parameters for achieving the wider objectives of the review of the public space and returning it to the city.
It is proposed:
- development of the free spaces, turning their dynamics towards the city that surrounds them with the variety of outdoor activities - functions in opposed to the logic and practice of that of valuable consideration.
- creation of “green corridors” flowing and spreading in the city.
- formation of game and socializing point cores tha are unified through the sidewalk and the open-spaced network that either exists or is created after space alienation.
- creation of light (made of metal or wood ), indoor architectural constructions, the Urban Rooms, which being part of each open land, participate in the landscaping through their versatility and their tendency to change acquiring different uses each time.
- regulations of traffic for the controlled use of car, aiming for the proper function of the sidewalk and the open-spaced network.
- creation of two-storey underground parking space.
- inclusion of the “empty” buildings and the other infrastructure facilities, located around the perimeter of the plots, in each land assigning them a use according to the variety of needs.