INTEGRATION WITH THE CITYSCAPE AND URBAN STRUCTURE 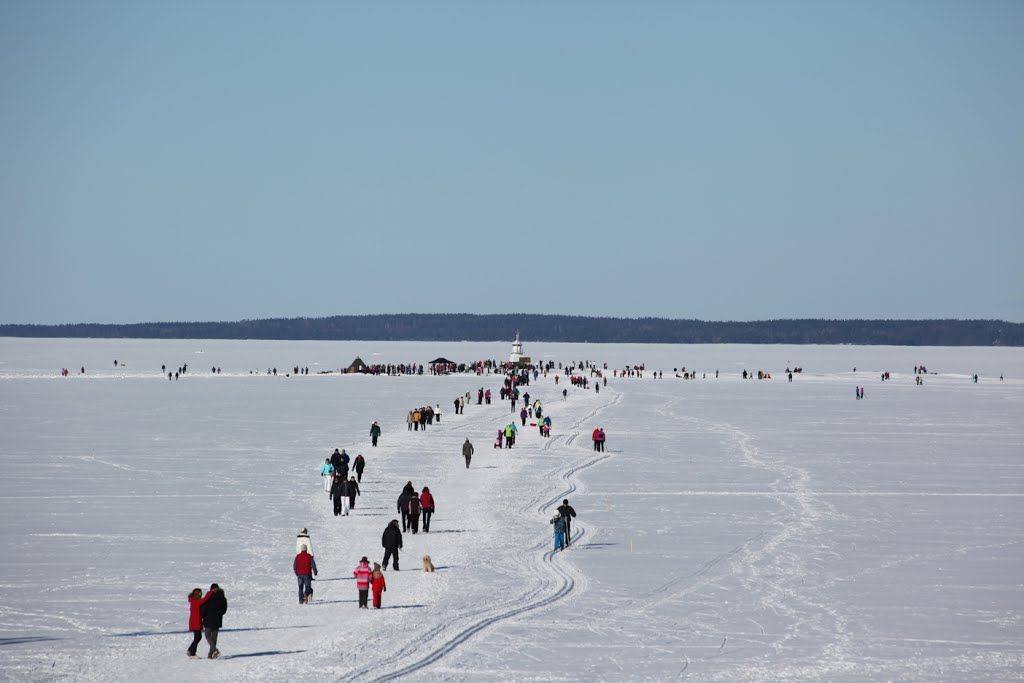 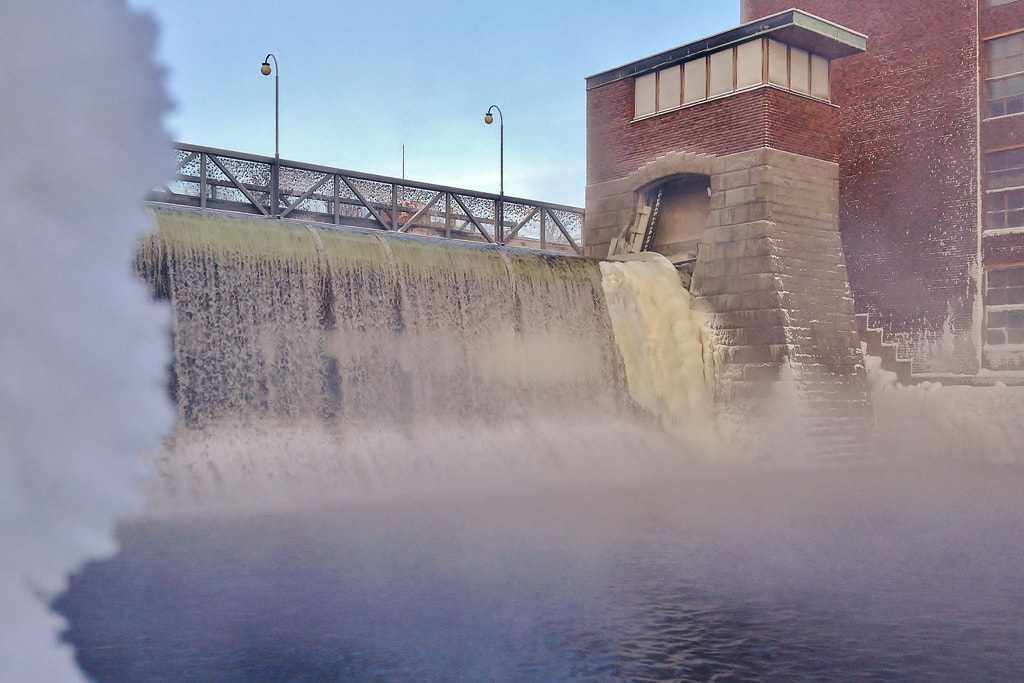 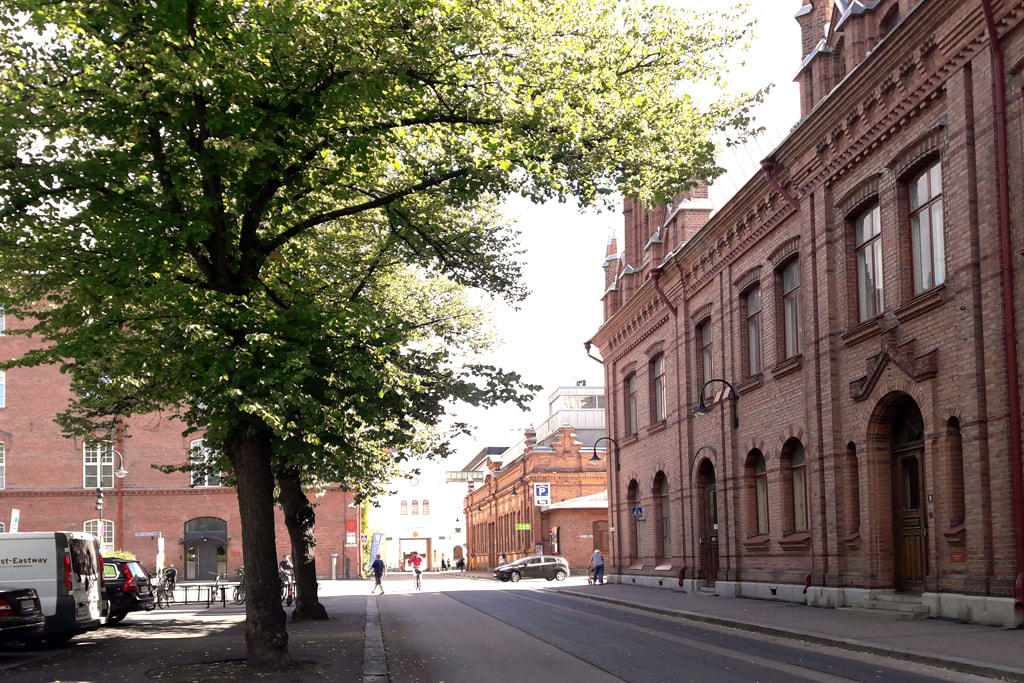 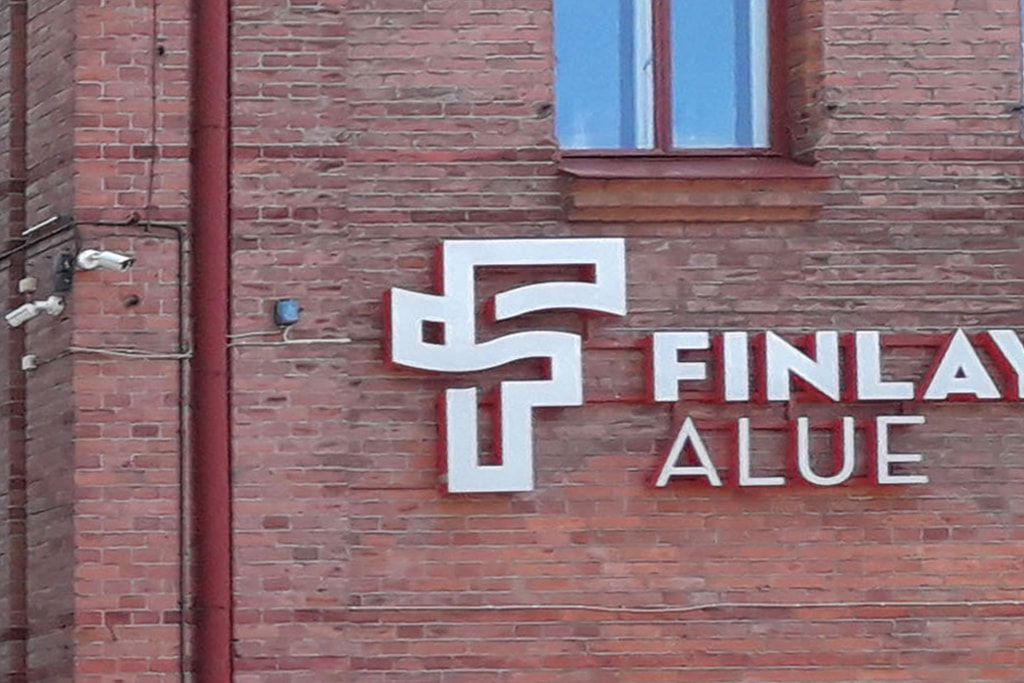 Landmark values
The city of Tampere combines the former industrial character with the modern urban scenery and the natural environment, making use of the parks and the green areas. Depending on the weather conditions, the area transforms from a sunny green place attractive for walks along the lakeshores, to a white frozen scenery in the winter, where activities can extend even at the top of the frozen lakes. In particular, the Finlayson district evolved to meet the new needs of the residents and visitors. For the last forty years, the area compiles a city within the city with constantly evolving activities. Furthermore, the heart of creativity lives around the museum area. The old buildings have been used in a more contemporary way, combining entertainment, art and business activities. The new Sara Hilden Art Museum aims to reflect the evolution of the city and the district throughout the years, while hosting a great variety of visitors. The integration of the cultural environment is a central part of the design. The solution is based on the preservation of the existing sightline and the promotion of values of the built environment. The building is positioned in proximity from the canal and at the limit between the urban activities and the Wilhelm von Nottbeckin park. The proposed solution aims to become a meeting point and a landmark of the area, achieving the smooth transition from the urban to the natural environment and vise versa. The welcoming nature of the design assists in the integration of different activities, including art and entertainment, indoors and outdoors functions.
The new Sara Hilden museum aims to become a meeting place for visitors to the exhibitions and for those who work and spend time in the area. The proposed solution has the potential to become a landmark in the Finlayson area in a semi-subtle way, creating a building shape which simulates the flow and the relation of the water that so characteristically crosses the city. The intense external plasticity of the building, gives a sense of a sculpture that combined with the curved sides compile a dynamic that interacts with the existing area, respecting the old and its values in a modern and creative way. The aim for the formation of this modern platform is to create a sense of "belonging", along with a visual getaway towards the park. The proposed design relates to the existing built environment simulating the building rooftops across the city as of flowing between them. Thus, the museum becomes an interconnected part of the pathway and the walking experience, where art and creativity is combined with green and spirituality. The main materials are translucent glass panels with plant material and reused concrete and the design has taken into consideration innovative technologies, lowering CO2 emissions and extending the lifespan of the solution.

Open space is available at the Pyskintialue, formulating a publicly available terrace that offers a visual getaway to the museum and the park. As Kuninkaankatu street is mostly busy, the progressive transition towards the natural landscape of the city park, limits speeds and alters the landscape characteristics. Naturally, the view of the museum and the park, as they are progressively revealed, create a strong visual experience and constant stimulus of new information to the visitors. The solution was developed based on the perimeter created by the existing trees, which are all preserved.
Something is happening at Finlaysoninkatu corner

The starting point for the synthesis of the building shape is based in the most important natural element of the Finlayson area, the Tammerkoski canal passing through the city. The constant movement of water in the canal, in contrast with the immobile canal walls, was the inspiration that worked as a starting point for the synthesis of the proposal of the museum. The conceptual approach of the moving water with the static walls was attributed to the proposed design with three different elements: The two reversed rectangular and compact building volumes at the West and the East, with curved internal sides relate to the curved canal bank walls, formed by the sediments transferred by the flowing water. The bridge consists of externally inclined surfaces, related to the constant movement of water. At the S-W corner of the structure a synthetic elation of the facade is formed, via the intensly inclined external surfaces, simulating the discharge of the canal to lake Pyhajarvi.

A linear zone, a cultural corridor that extends from the riverside on the West to the residential zone on the East is integrated in our masterplan’ s five basic elements in sequence: the elevated square, the library, the main plaza, the factory building, and the green area. In that sense the library and the factory become part of a mobility system, where the factory welcomes the dwellers on the east and the library offers a loop interior route, before establishing continuity beyond the river, to the developing side of the city. Our design core is the urban plaza, defined by the structures around it. This public, open space acts as a flow capacitor, absorbing the mobility of the four complementary cardinal points: library, factory, energy-park, and city; re-arranging and dissipating the energy back.
It is our sense that there is need for less compact, expanded and horizontal architecture that will offer the residents a different, desirable urban experience. Creating a non-vertical building strongly connected to the ground is seen as a focal design point, because it will enable the connection to the pre-existent factory and the surroundings.
A dichotomy ... a continuity; the cultural corridor splits. The upper level still brings strong and multiple connections to the ground. Its gradually extend-able form creates an open, permeable urban landscape. Τhe ramp, a narration of knowledge, escalates featuring educational and socializing events- urban momentums. Clear visibility between the different programmatic zones is possible through the gap-bearing ramp geometry; these spaces have the quality of internal, urban balconies. 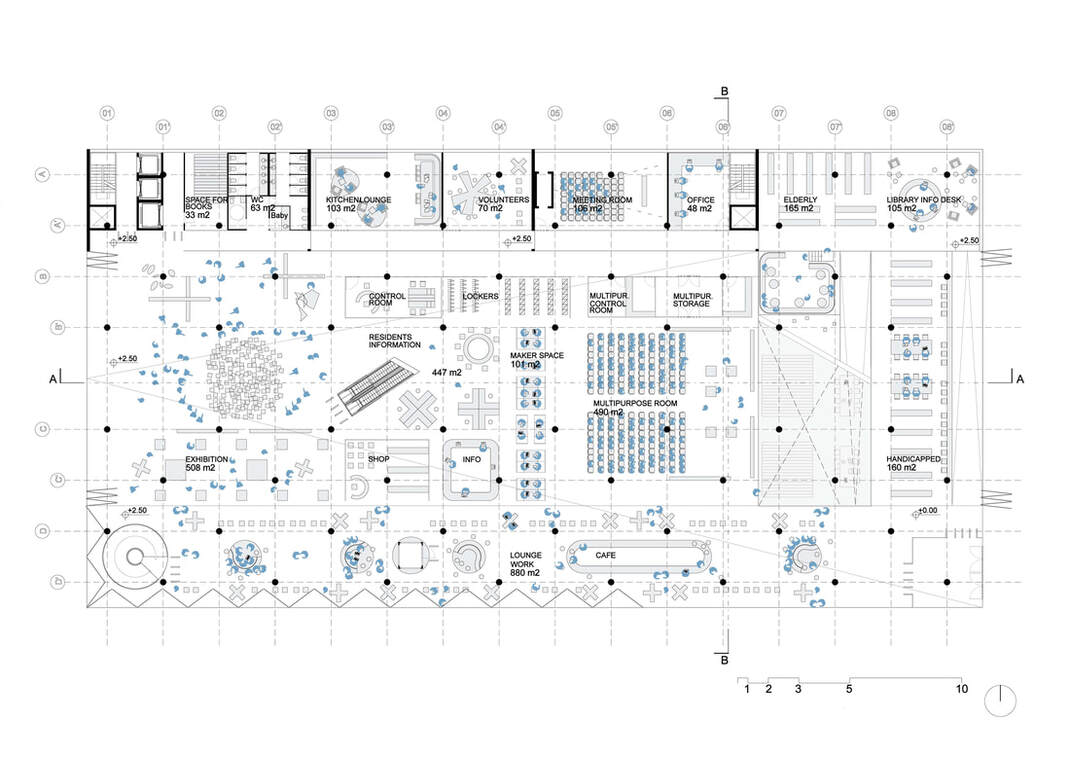 Ground floor
The whole ground floor is organized with mobile furniture in order to be flexible and offer possibilities. The circulation is organized in an efficient way. There is a panoramic elevator, and a second one embedded in a circular stairs, accessible from the lobby area, that bring the visitors across the different levels of the library. The circular stairs with the elevator could also act as a separate service for the sports area. In the lobby one can find an escalator that brings the visitors straight to the cultural education space. 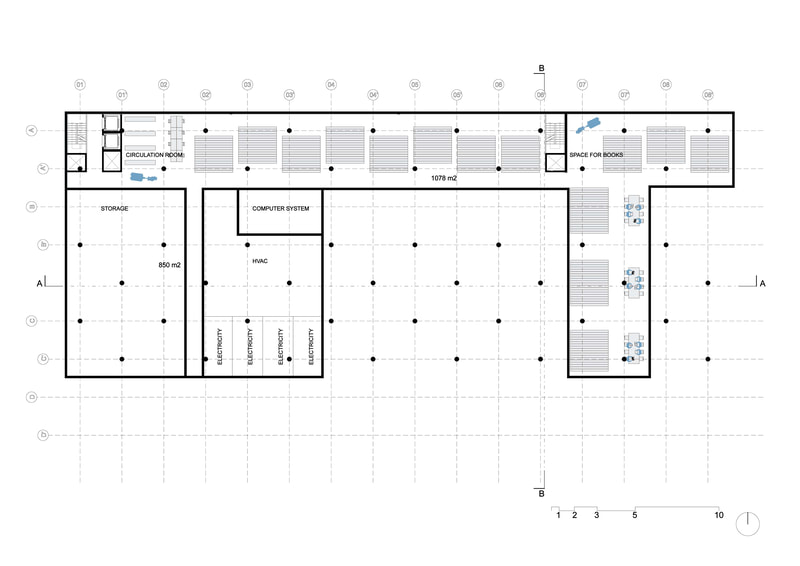 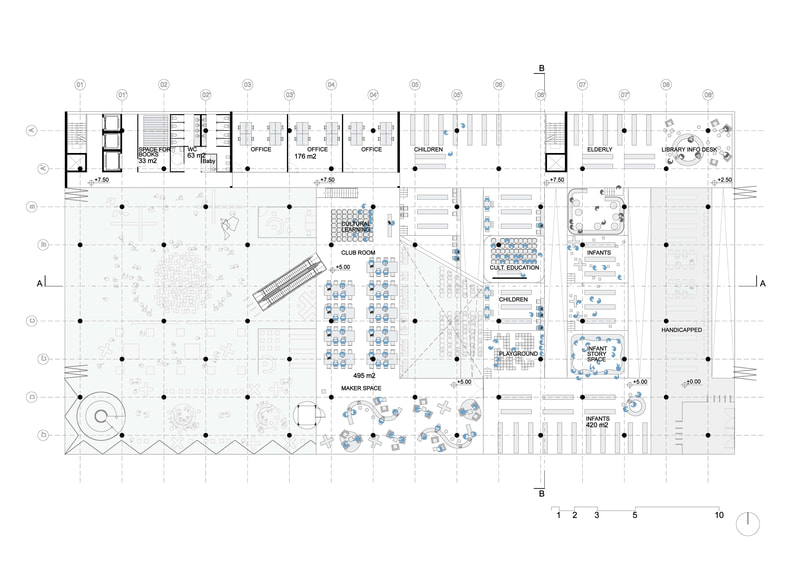 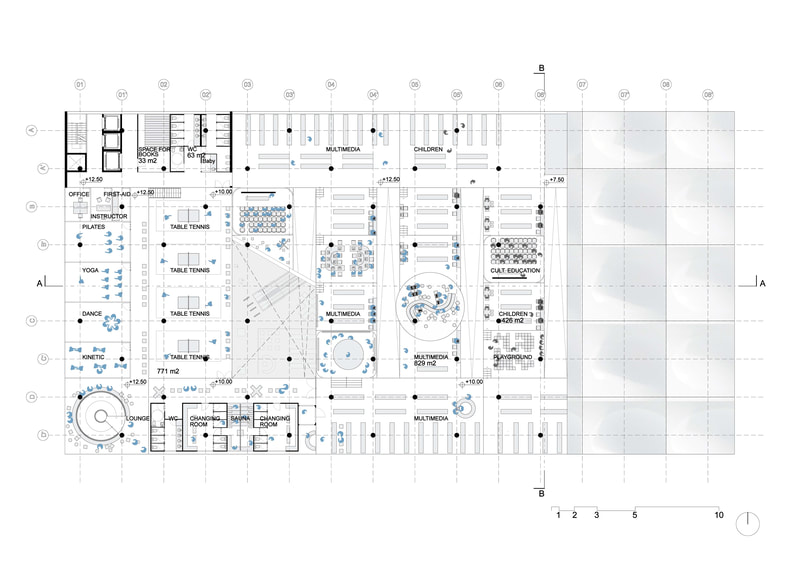 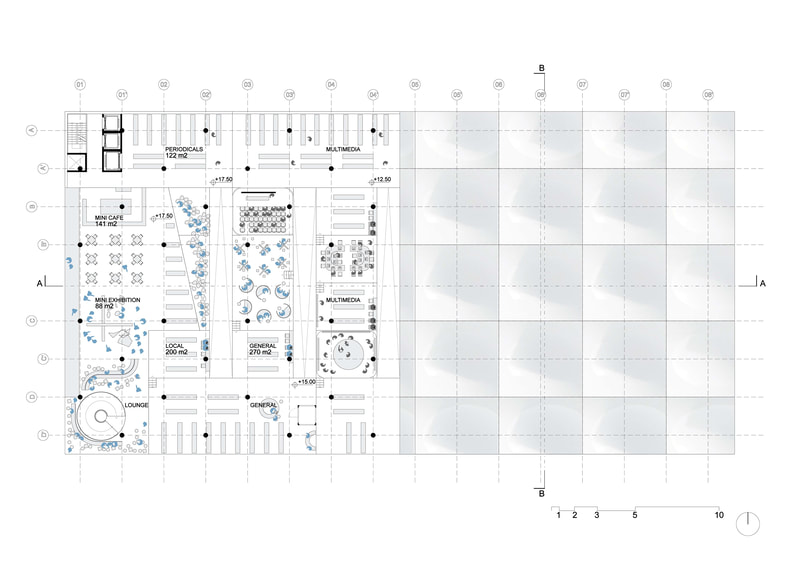 THE WORD THAT IS HEARD... PERISHES,
BUT THE LETTER​ THAT IS WRITTEN... REMAINS. 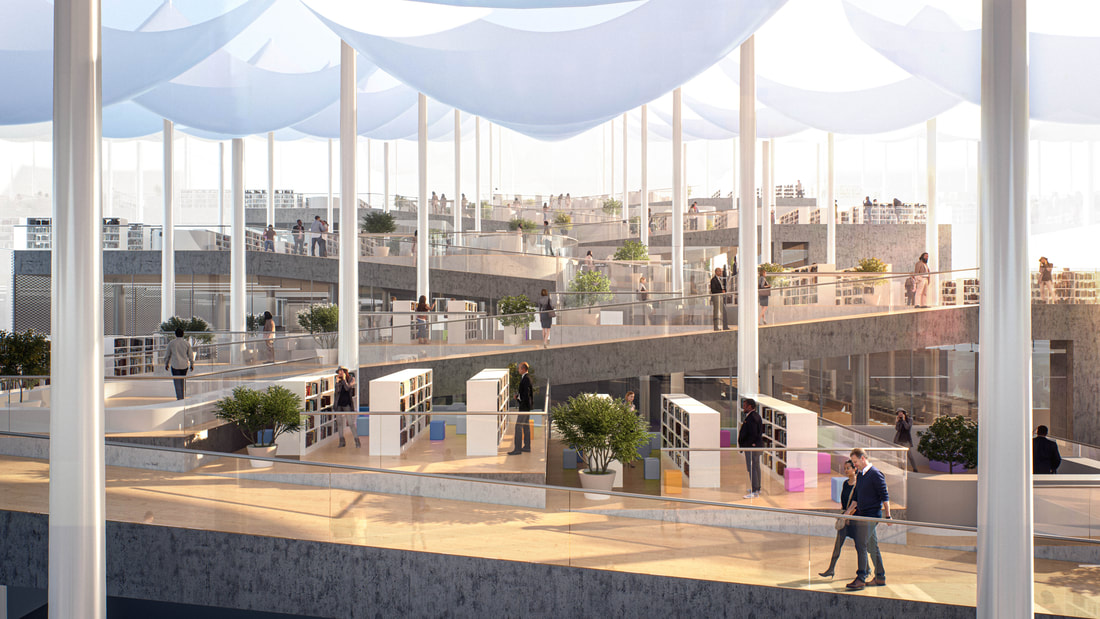